Milou began his show career 25.04.04 in the Lahti International Show, in which he was promisingly BOBPUPPY as his brother was 2nd best Puppy.

23.05.2004 KV Ventspils, LATVIA , in his very first abroad show Zupelny Sukces was also BOB PUPPY.
In addition to this Milou, despite being very tired after the long day, charmed judges in the big ring and became BIS-3 PUPPY in this international show!

In the Pori International show 31.07.04 Milou 10, at the age of 10 months, participated in the junior class. The result was great since he became 4th best male and received his first CAC, the judge for the breed was polish Elzbieta Scwalibog. 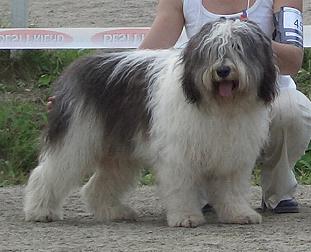 After this Milou took quite a few CAC - 12 altogether from different shows as well as BOB-positions.
His last CAC towards Finnish Championship Milou took from
Oulu International Show 02.01.05 and at the time Milou also became FIN & EST CH .

Milou also has CAC's from Poland (in where he during summer 2005 in Gorzow Wielgopolski was BOB in a group of very competitive polish PONs) and one CAC also from Lithuania.

Milou also has 13 CACIBs. In the "Show PON of the Year" competition Milou has been 3rd in 2004, 2nd in 2005 and in 2006 (even though in the last one Milou did not even have the maximum number of shows which is 5) . In club shows Milou was in the same years mentioned earlier BIS-3, BIS-2 and BIS-6. In the Poznan World Winner Show 2006 Milou participated in the Champion class and was at the end of the day EX3 in this highly competitive show!