Vivat is a son of two very successful Polish pons. 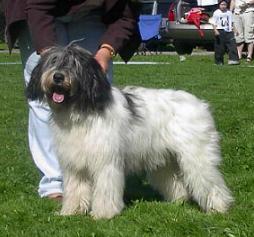 Also Vivat, as many of our other PON-puppies, has started his show-career in the Finnish PON Club's CLUB SHOW .
Vivat participated in the same Club Show as Cedr in Sipoo 21.08.2005.
The judge was Swedish Annemarie Thomassen, and Vivat received HP and was 6th best male puppy.

The next challenge for Vivat was 23.10.2005 SPECIALTY SHOW for PONs in which Vivat, at the age of 9 months, was in the junior class. The judge was polish Ewa Buklad.

To our joy the results from this show were excellent since Vivat was 3rd best male and received his first CAC. 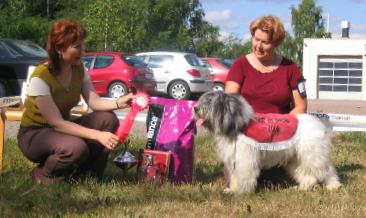 After a long show-pause Vivat participated again in the PON CLUB SHOW , in August 2006, where the judge was Elena Ruskovaara.
This club show was a marvelous success for Vivat since he first won the class of males under 2 years, then all males and finally all PONs by being BEST IN SHOW 1 of the Club Show.

10.09.06 PON club's unofficial Obedience and Agility contests, in which also this year many enthusiastic participants had attended, and Vivat took part in the agility beginners' class. The result was: time: 79,72s result: 50

17.09.06 Hyvinkää Vivat participated in a group show and was BOO, BEST OF OPPOSITE SEX, and received CAC

01.10.06 SSKY SPECIALTY SHOW in Hyvinkää (Also a specialty show for PONs). The judge was polish Thomas Borkowski. Vivat competed in the youth class and was class winner and became 5th best male and received again CAC from specialty show.

07.10.06 OULU Int : Vivat was 2nd best male and received his fifth CAC and res-CACIB which will transfer from Wolec again

09-12.11.06 WORLD WINNER SHOW 2006 Poznan :
We participated in an arranged trip to the World Dog Show (OK-busses). During our journey we spent nights, both ways, in Lithuania Kaunas and stayed in Poznan during the entire show. We started our journey back on Monday. Thanks to travel organisers and professional drivers our journey went extremely well: the hotels were good - even marvelous by size in Kaunas - the staff was friendly, english service was available, busses were not robbed, we did not get lost, in the shows we were just in time every day, and came home safely.
Vivat succeeded marvelously in the World Winner Show by becoming second in his class:
MALES YOUTH CLASS Vivat Flinkbein Rivendall EXELENT , PLACEMENT second

LAPPEENRANTA 08.04.2007 :
In Lappeenranta we went on Easter Sunday. We knew from past experience that the show place was not the warmest possible since this show is arranged in an ice stadium. PONs ring was in the training hall in which underneath mats was a cold ice. And yet, even though we knew this, we somehow managed to take too little clothing... In this show Vivat was 4th best male after competing in the open class for the first time and also received his last CAC towards Finnish championship and therefore Vivat is now FIN Ch.